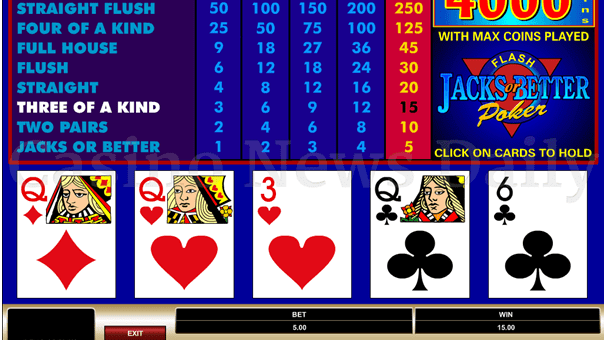 Video poker is the most popular game at online casinos after slot machines. There are several variants of video poker games available to play with your iPhone. The oldest and most common is Jacks or Better.  This video poker is also known as draw poker and is easy to play the game quite similar to five-card draw poker. Though a bit of skill is needed along with your luck in this game you need to use a proper poker strategy to play Jacks or Better.

The rules for Jacks or Better video poker are the same as for five-card draw poker. The only difference is that there is no raising or bluffing and you’re not really playing “against” other players. You just make a single bet at the beginning and your goal is to have a hand that includes a pair of jacks or better. Otherwise, the house wins.

To play, you select a number of credits you want to wager from one to five on the hand. The credits can be worth $0.25, $1 or more apiece, depending on the machine.

Then you are dealt replacement cards and your final hand decides whether you win or lose, and how much.

You will win more the better your hand is, so make sure you know the ranking of poker hands.

Like all games you play against the house in a casino, it is nearly impossible to actually win in the long term. However, video poker offers some of the best payouts for a slot-type machine when played well. Also when combined with good casino bonuses and comp points, you can actually make a good win due to the freebies given out.

But in order to enjoy the high payback percentage, you have to play using an expert strategy. The casinos and the manufacturers estimate that players who don’t use a proper strategy are giving up between 2% and 4%, which is a significant amount of money.

Computer programs can determine the expected value of any given hand. There are 32 different ways to play any given hand, but only one way has the best expectation for the player. The more often the player chooses to play her hand in that way, the lower the house edge becomes.

When you consider that 55% of your hands will lose no matter what, you can see that strategic decisions can be narrowed down pretty fast. In fact, a pair of jacks or better will make up 21% of the number of winning hands you get. The small hands, including three of a kind, two pairs, and a pair of jacks, make up 70% of the total return on the game.

How to use a Jacks or Better Strategy

All Jacks or Better strategy tables consist of a list of hands. The player starts at the top, which is the best possible hand, and then moves down until the player finds the hand that he actually has. The player then plays it according to the strategy instructions.

Different strategy charts offer somewhat different instructions. Below is provided one Jacks or Better strategy that’s easy to learn. The house edge against someone using this strategy is only 0.8%, which isn’t as kind to the player as 0.5%, but it’s still considerably better than just about every other game in the casino. Also, this assumes that you’re playing a full-pay, 9/6 Jacks or Better game.

Keep any pair of jacks or better.

Keep any 3 cards to a royal flush.

Keep any 4 cards to a flush.

Keep any pair lower than jacks or better.

Keep any three cards to a straight flush.

Discard all 5 cards and draw a new hand.

One of the main principles behind most video poker strategies is that you want the machine to deal you a winning hand. If you’re dealt a winning hand, you will very rarely discard any of those cards to draw to something else. The only exception is four cards to a royal flush, and that exception is only there because the payout on that hand is so large compared to the other hands.

A four-card flush draw is better than a low pair, but both of them are better than a straight draw. The reason, again, has to do with the differences in the payouts as compared to the possibility of finishing your hand.

Some casinos don’t offer the best pay tables at the lower limit machines, so watch out for poor pay tables. The best machine for players on a low budget is a nickel machine offering the 9 / 6 paytable. If you can’t find one that fits your budget you should find somewhere else to play.

If you play less than the maximum number of coins it increases the house edge for the machine. The expected return percentages are based on playing max coins. You may have seen the payback percentage on a 9 / 6 Jacks or Better machine listed at 99.54%. This is a good return but this number is based on playing max coins and using the proper strategy.

2. Look out for the Best Pay Table

Look out for the Best Pay Table

Jacks or Better machines have a wide range of pay charts. Each chart offers a different long-term house edge. The most popular Jacks or Better pay table is one that offers a fair return and is called a 9 / 6. This means the full house pays 9 coins and the flush pays 6. If you see a pay chart that offers less than either of these payouts you’re playing with a bigger house edge. This gives the casino more money per hand and this adds up quickly.

If you play 200 hands per hour at $5 per hand and give the casino an extra 1% per hand you lose on average an extra $10 per hour. Over a five-hour playing session, it costs you an extra $50.

3. Slow down your game

Slow down your game

This is one of the aspects that most players ignore as how much they lose per hour or how much their expected losses per hour are. Many people understand the low house edge that Jacks or Better machines offer, but they forget that the other part of their loss equation is how many hands per hour they play.

If you play as fast as possible you can play hundreds of hands per hour. Video poker machines are designed to have a house edge, like most casino games, so the more you play the more you lose. By simply slowing down you lose less per hour, can play longer, and increase your chances for a winning playing session.

VIP programs and player clubs at casinos are designed to get players to play more and play longer to get better comps. But that doesn’t mean you should avoid them. If you’re going to be playing Jacks or Better anyway you might as well earn comps while doing so. Even if you still lose in the long run the comps can cut your losses in half or more if you lose $10 an hour on average playing but get comps worth $5 an hour back you’re much better off than just losing. Note that each casino has a different determination for awarding comps, but even the worst ones give enough away to help reduce your losses.

Signing up for the VIP program is easy. Simply go to customer support in an online casino and tell them you want to sign up. Don’t play another hand of Jacks or Better, or any other casino game, without earning comps.

5. Use the Best Strategy

Use the Best Strategy

Every hand on a Jacks or Better video poker machine has one best way to play. The only way to play with the lowest house edge possible is to always make the best play. The strategy for Jacks or Better is fairly simple you can get strategy cards that have all of the correct plays to use while you play. Most casino gift shops have them and you can buy them online. You can even print out the correct strategy charts and use them. Never play Jacks or Better unless you use the best strategy. By doing this you lose less in the long run, have a better chance to win every playing session, and can play close to a break-even game when you get comps from the player’s club.

Most casino games that offer a progressive jackpot are attractive because they offer a chance at a big win for a relatively small bet. To win any progressive it’s an exciting moment and in many games, the possibility acts as an added bonus.

But almost every Jack or Better machine tied to a progressive has a hidden cost. When it is advised to find and play the best pay table but with Progressive Jacks or Better machines, it’s just the opposite as they use almost universally poor pay tables. So what happens is you have less possibility of hitting a jackpot for a bad paytable. The bad paytable consistently takes more of your money on every hand, increasing the profit of the casino. Of course, if the jackpot gets high enough it may still push the house edge down toward zero and even into a positive expectation situation, but this doesn’t happen often. If you have the choice between a 9 / 6 Jacks or Better machine and an 8 / 5 or worse machine with a progressive you’re almost always better playing 9 / 6.

You can also practice playing Jacks or Better online or with an iPhone app at Spin Palace, Jackpot City, Rich Casino, 888 Casino, Casino.com and others to understand your game. By practising and consulting a strategy chart, you will be able to remember the best selections to make for each starting hand. This will improve your odds of winning at video poker.

Jacks or Better is one of the best games casino players can enjoy. You control the rate of play and your total amount wagered. When you combine this with a good paytable, good strategy, and comps, you can play for hours for a relatively small amount of money. Also if you’re lucky enough to hit a royal flush you have a nice win for the day.

This is everything there is to know about the Jacks or video poker strategy.